The Australian media’s reaction to a speech by the Chinese envoy at the National Press Club in Canberra on Wednesday is quite disconcerting, given that most of what he said has been known for 50 years.

Xiao Qian’s statements were interpreter like rude, creepy, creepy, etc., but the essence of what he said – China’s position on Taiwan – has been codified in the press since the United States changed its position on relations with the mainland and passed from the recognition of Taiwan in 1972.

It was understood at the time that Taiwan was a province of China and that the United States would have a one-China policy that did not grant diplomatic recognition to Taiwan. About 180 countries have the same position on Taiwan, and therefore the almighty outcry over Xiao’s remarks is extremely difficult to understand.

The only change regarding Taiwan was in China’s statement last week that after reunification it would extend the same policy to Taipei as it did to Hong Kong: one country, two systems.

Australian journalists tend to paint China only as an aggressor in the region, citing its military buildup in the South China Sea and its attitude towards its neighbours.

But they forget that China, in its 73-year history, has never invaded any other country and built a wall to keep people out. The prospect that is never mentioned by the Australian scribes is the fact that China is surrounded by more than 40 American bases, some of which have nuclear missiles located around 450 km from Beijing. 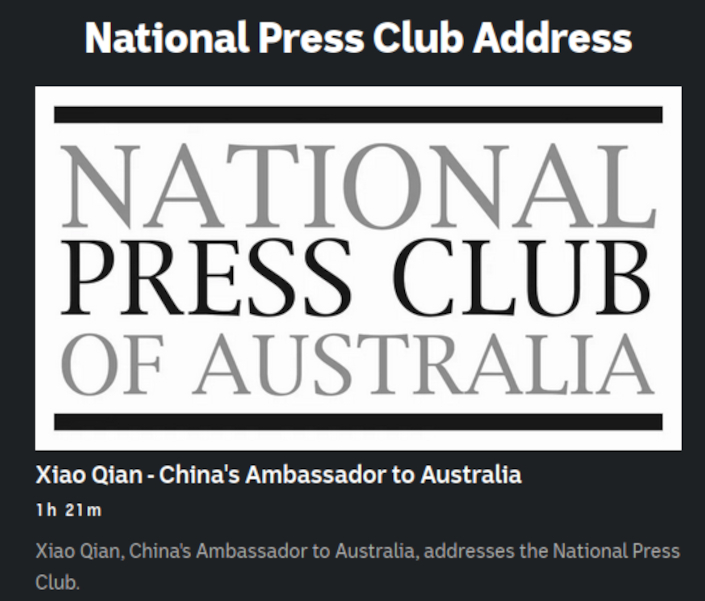 The ABC has its own way of belittling Xiao Qian; his photo is missing from the link on iview to Wednesday’s speech. All other NPC speeches have a picture of the speaker. Screenshot by Sam Varghese

There is no doubt that if a country were to position similar weapons 450km from Australia, there would be an almighty roar from the politicians in Canberra. But China is expected to get along and be quiet, an attitude that clearly shows how the colonial attitude still dominates the thinking of Australian media and politicians.

Xiao’s speech was blunt, at times dry, and he was careful to remind the Press Club audience how much Australia now depended on China for its economic well-being. It is possible that this did not please the journalists present, but he was then only stating facts.

One thing he didn’t do was talk about the flattering, verbose way the Anglo-Saxons do; it was short and spoke to the point. It is a way of speaking common to the people of Asia.

David Crowe, Chief Political Correspondent of Nine Entertainment age and Sydney Morning Herald newspapers, describe the discourse as a “new and troubling dynamic that seeks to shift the debate inside Australia as the threat of war looms over the region”. Exactly what new he found is unknown.

But Crowe’s interpretation was not unique; many others have expressed similar sentiments, suggesting that their collective opinion will always reflect that of the government in place – which, in turn, is repeating whatever is being repeated in Washington.

What struck me as curious was that none of these journalists, who no doubt all earn six-figure salaries, simply refuse to deal with facts: neither Australia nor China can change their geography. Moreover, Australia cannot easily find another trading partner to resume exports in such volumes.

Singaporean Prime Minister Lee Hsien Loong has in the past expressed what can only be called a sensible approach: to treat China on its merits, because there is no denying that it is there and that it is a very powerful force in the region.

But reality is a difficult concept to grasp, especially when it essentially comes down to admitting to listening to once-demonized people. Australia has become a flattering sidekick to the United States insofar as it is incapable of adopting anything like an independent foreign and defense policy.

Journalists, who like to pass themselves off as important by pandering to powerful politicians, will do the same. You don’t have to pay much attention to them; the image they paint is far from reality. Remember that New Zealand has no such problems with China, although it too is often critical of Beijing’s actions. I am still waiting for a journalist to examine why Prime Minister Jacinda Ardern is able to navigate these tricky waters with ease.