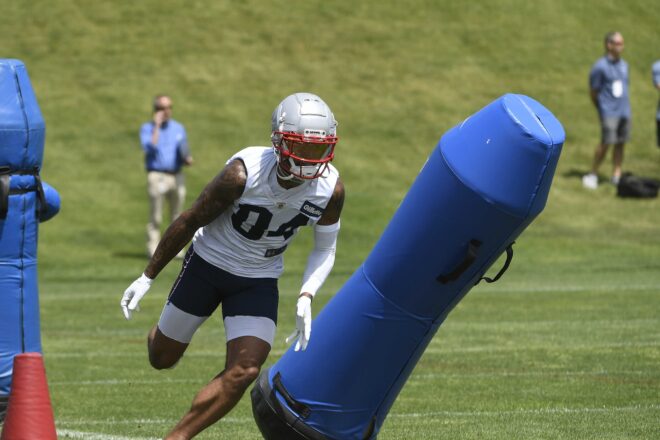 The New England Patriots opened the second week of training camp on Monday, and for the first time this summer the pads made a return.

Before the day’s work, the Patriots locked up Pro Bowl punter Jake Bailey for a four-year extension worth $13.5 million ($6.5 guaranteed).

Bailey, who turned 25 in June, was entering the final year of his rookie contract and facing a $4.05 million salary cap charge. By extending Bailey, its maximum load has been reduced of approximately $1.85 million while increasing the Patriots’ overall cap space to approximately $4.75 million.

As for the flow of the day’s camp, work focused on running play, kickoffs and one-on-one drills between wide receivers and defensive backs. The offensive linemen took on the defense.

Offensively, Mac Jones and Bailey Zappe were the quarterbacks as Brian Hoyer was absent. Jones went 10/15 with an interception while Zappe completed 10/15 passes between the 7 v 7 and 11 v 11 drills.

In what has become a common occurrence in camp, wide receiver DeVante Parker caught another impressive touchdown from Mac Jones, beating Malcolm Butler deep for 11-on-11.

Meanwhile, on the defensive side of the ball, cornerback Terrance Mitchell continued his strong side by recording an interception for the third straight day, and Butler bounced back from Parker’s touchdown causing two pass breakups.

ESPN Boston’s Mike Reiss observed rookie guard Cole Strange goes through a ‘welcome to the NFL introduction’ as he struggled to block Christian Barmore and Henry Anderson on individual drills. Bill Belichick would take Strange aside to work with him.

Check out some of the best social media sounds and images from day five at the Foxboro training grounds below.

Damien Harris pumped to put on the pads #Patriots pic.twitter.com/yf7ylr8pGM

Patrick Chung is here to help with the security today. #Patriots pic.twitter.com/nxVWXEDpSM

Marcus Jones also had a PBU against Tre Nixon; Kendrick Bourne beat Jalen Mills twice, including a nice back shoulder from Mac Jones; and Terrance Mitchell had a DPI against Nelson Agholor

The first-ever live representative of the 11 Passers-by and Mac is chosen by Terrance Mitchell. I tried to hit Thornton on the road, and I didn’t see Mitchell. #Patriots

Bailey Zappe shows off his arm strength with a 40 yard laser to Devin Asiasi. Asiasi also made a nice catch.

First day in full pads for the #Patriots, the sleds are just the warm-up. Tight ends and safeties get their hands on during padded drills 😤 pic.twitter.com/URsspd3nMq

Mac Jones today: 5 of 9 with an interception at 11-on-11, 5-on-6 at 7-on-7. The INT looked like a possible miscommunication between Jones and rookie WR Tyquan Thornton. Terrance Mitchell sat in his zone and the throw went straight for him as Thornton raced overhead.

The main things that stood out from the fifth practice of Patriots training camp (Cole Strange in the 1-on-1 pass-rush drills; Tyquan Thornton and the deep ball, etc.). pic.twitter.com/cwH38zpr4M

Here are some receivers practicing with their hands and steps as Monday’s practice begins, starting with Trey Nixon. 1/4 pic.twitter.com/r3zUXGMvT5

From now on @Patriots‘, their first in the pads this training camp, here is rookie receiver Tyquan Thornton, who then joined Mac Jones on a 50-yard beauty (throw and catch) down the right sideline. pic.twitter.com/r43RlyH2Pz

DeVante Parker was on the receiving end of two killer plays today, making a jumping, twisting catch on a deep ball down the right sideline and striding away for a long TD to the left. Malcolm Butler was on cover both times, later bouncing back into the red zone. pic.twitter.com/OgSXS1JQGt

“That’s when we really start to learn about our team.”

Patriots coaches on the first #PatsCamp practice with tampons. pic.twitter.com/t86tZaMGZR